​
Though the weather can be cold and unpleasant during the winter months, there is significant bird movement possible during this time, so the birding can be quite rewarding. Lakes & Ponds should be frequently checked for waterfowl, Farm Fields checked for Larks, and Feeders should be watched for wintering specialties:

Waterfowl
Although the largest numbers of waterfowl pass through York County in March and November, there is much that can be seen throughout the winter.  Ducks, Geese, and Swans will continually move northward or southward during the winter in search of food and open water; so some flocks may spend most of the winter in York, while others come intermittently.  This means that frequent checks of any unfrozen body of water can be productive during these winter months.  Changes in temperatures may trigger some movement and warrant extra vigilance of the open waters. Ring-necked Duck, Bufflehead, Wigeon, Gadwall, Common Merganser, and Hooded Merganser are frequently found in York County over the winter, but many other less common species of duck are quite possible such as Redhead, Pintail, Common Loon, Grebes, Scaup, Goldeneye, Shoveler, and Canvasback.  Also keep an eye out for rarities such as Long-tailed Duck and any of the species of Scoters.

Migratory waterfowl can drop down on any body of open water, but Pinchot Lake and Long Arm Reservoir tend to be the most reliable spots.  Lake Marburg (Codorus State Park) is a large lake and can have very large numbers of waterfowl; but, it is open to duck hunting and is often devoid of migratory waterfowl while the season is open. (The 2021-22 season is from Oct 9-16th and Nov 23 - Jan 22).

Another hotspot is the Spring Grove Paper Mill Pond, visible from Rt 116.  This pond can be a gem in the winter when it is not frozen over.  Due to its small size, the pond elicits very close and satisfying views of any waterfowl that may be present.  Ring-necked Duck, Gadwall, and Hooded Merganser are often seen here along with the possibility of other, less-frequent visitors.

Lake Williams and Lake Redman are also worth a visit.  Large numbers of Common Mergansers often winter in these lakes.  There are usually a few species of dabblers hanging around the shallow water at the Lake Redman Boardwalk if it is not frozen over.  Look for Green-winged Teal, Black Duck, Pintail, Shoveler, or a wayward Snow Goose.

A final spot to look for waterfowl is along the Susquehanna River.  Since the Susquehanna River is in Lancaster County and not York County, any birds seen on the river technically count as Lancaster birds unless they land on the shore on the York side.  Two  of the best vantage points to view birds on the river from York are in Wrightsville.  They include Lemon Street and the John Wright Restaurant property.
Wintering Finches and Sparrows 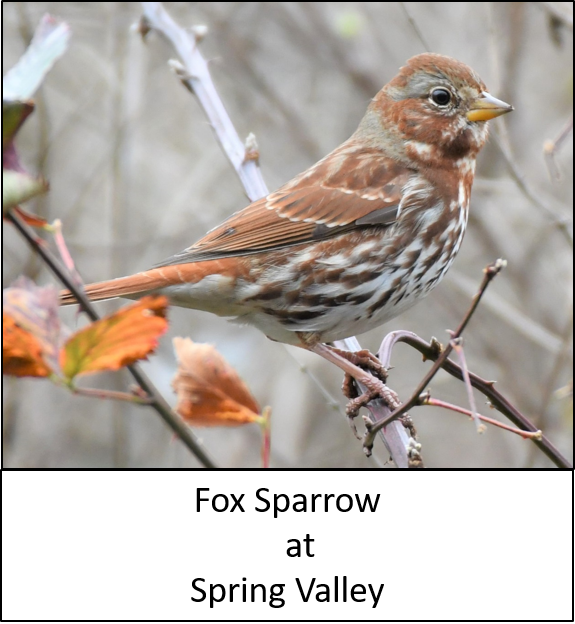 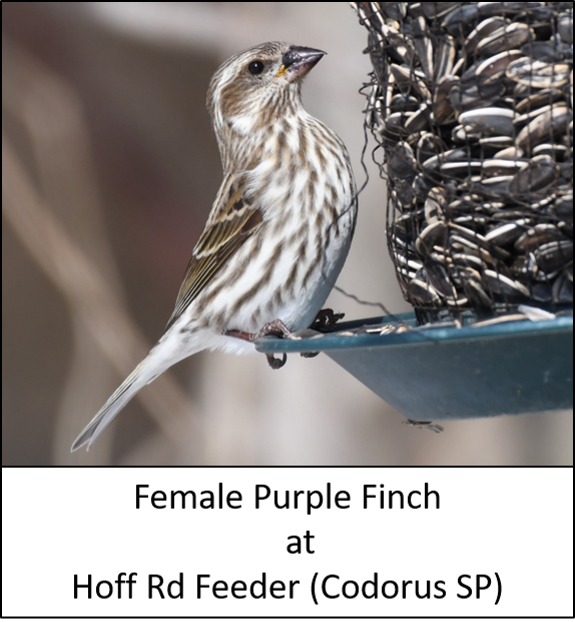 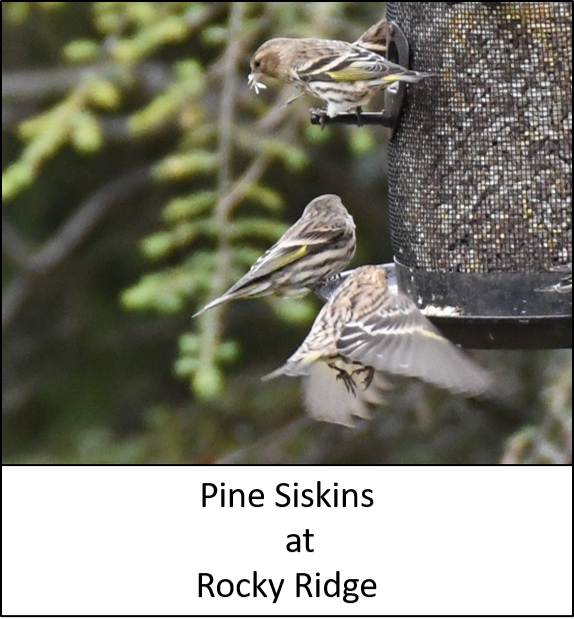 Throughout the winter, it is important to keep a close eye on birds coming to bird feeders.  There are several “good birds” that are most easily found at feeders that could be overlooked and passed off as House FInches if one is not looking carefully.  Watch from your own backyard feeders or check the public feeders mentioned at the bottom of this web page.  Keep a close eye out for Pine Siskins (smaller, more heavily streaked finch, with a hint of yellow in the wing),  Purple Finches (slightly bulkier than house finches with a white eyestripe), or a very rare Common Redpoll (yellow bill, small red cap, and black area surrounding the base of the bill)

Other good “Feeder Finds” to keep an eye out for over the winter are Fox Sparrow, Tree Sparrow, and Evening Grosbeak (very rare, but possible in irruption years).  Another possible, yet confusing species in the winter is the Black-Capped Chickadee.  Although almost all of the Chickadees seen in York year-round are Carolina Chickadees, there are a few Black-Capped Chickadees that venture south to York in the winter; especially in the northern, higher elevation part of the county. One should be very careful before claiming a Black-capped Chickadee though, because Carolina is by far the most likely and the two species look amazingly similar.

If you are really interested in winter finches, check out the Winter Finch Forecast available under the menu at The Finch Resource Network website (https://finchnetwork.org/)
​
Larks, Longspurs, Pipits, and Buntings 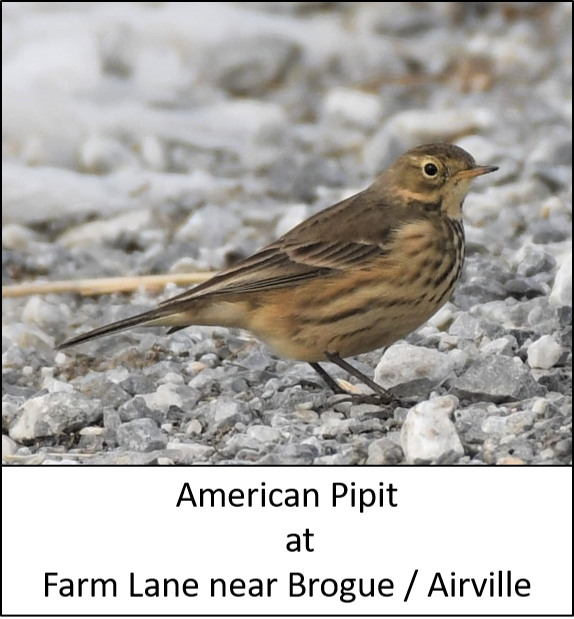 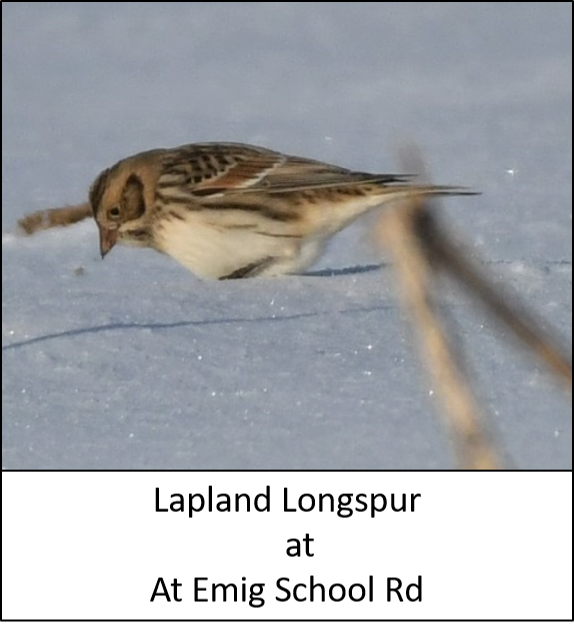 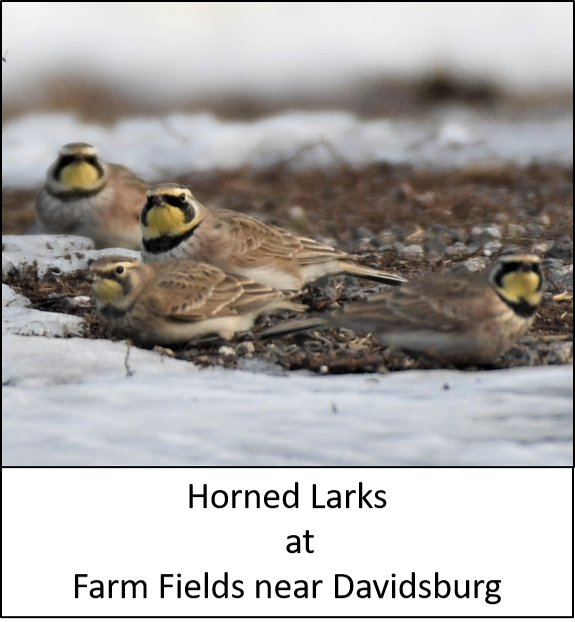 ​
Horned Larks can be found in York County year-round, but the numbers are highest in the winter time when many additional larks from the north migrate south to the US for the winter.  They tend to “flock up” more in the winter time.  Finding a large flock of horned larks can be exciting in itself, but a flock should always be looked over closely.  Occasionally, wintering American Pipits, Lapland Longspurs, or Snow Buntings can be found mixed in with the larks.  The flocks can be best found in large tracts of agricultural areas.  Plowed fields, fields with corn stubble, or other short cover crops provide good habitat for these field birds.

Driving slowly along lightly travelled rural farm roads and listening for larks with the car windows down is a good way to find them.  They are quite vocal all day, even in the winter time. The fields below Davidsburg, between Dover and East Berlin have been reliable for finding lark flocks.  The best roads in this spot tend to be Pinchtown Rd, Eagle Scout Rd, and Dairy Rd on the north side of Admire Rd.  Emig School Rd, located slightly south of Admire is also worth checking out. The Airvillle / Collinsville area in southeastern York County also has large tracts of farmland with suitable lark habitat.  In the winter of 2020-21, the fields along East Posey Rd (just east of Rt 74) held a flock of hundreds of field birds that yielded several Lapland Longspurs and a Snow Bunting in February when manure had been spread on the snow-covered fields.  Note: Be very careful if you are on this road as it is moderately travelled and there are no good pull-off spots.

A particularly good time to look for these birds is after the ground has been covered with several inches or more of snow.  These field birds will go looking for seeds along the roadsides where snowplows have exposed grassy areas, yielding nice and close views of the birds.  If the snow remains for several days, look for a snow covered field that has had “fresh” manure spread on top.  The seeds in the manure are a virtual gold mine for the birds and congregations of field birds can be found by the hundreds feeding on it.  If you are lucky enough to stumble upon such a large gathering, you have a good chance of finding a Lapland Longspur mixed in.  Bring a spotting scope, as it is often a necessary tool for picking a longspur out of the flock.
​

Short-eared Owls at Hopewell TWP Recreation Area:
It is a special treat to see short-eared owls hunting at dusk, and York County has a pretty reliable spot to see this occurrence at the Hopewell Twp Park, north of Stewartstown.  Beginning the last week  in November through the first week in March, there is a good chance you will find one or more short-eared owls flying low, hunting over the fields of the repurposed old landfill area.  The birds begin flying about 30 minutes before dusk and are best seen from the main parking lot on Althouse School Rd.

While you are looking for the owls, be sure to keep a close eye on raptors.  The northern harrier is usually seen flying low to the horizon just before the owls come out.  Also, in winters when Rough-legged Hawks move this far south, this site likely provides the best opportunity to see them in the county.  Bring your binoculars, blankets, and popcorn and enjoy the show!  Visit the HopeWell Twp Park site page for pictures and more information!

Gulls at The ‘Dump’
If you are so inclined to find some large numbers of wintering gulls in York County, there is no better spot than the active Modern Landfill located on Mt Pisgah Road off of Rt 124 between East York and East Prospect. This is not an official birding hotspot and most of your views will be distant, but it is quite likely that you will see gulls flying by the thousands here.  Most of the gulls will be Ring-billed Gulls, but Herring Gulls and Great Black-billed Gulls are reliably seen here.  It is also likely that some uncommon gulls visit here, but identification would be difficult due to the viewing distance.  Because you have no vantage point to see into the dump itself, you will only see gulls that are flying or ones that are perched on the crests and outer hillside of the landfill, so a spotting scope is highly recommended.  When the vehicles and machinery inside the landfill are operating, the birds get stirred up and become more visible, so be sure to visit during operating hours. Viewing is best from Riddle Rd on the west side of the landfill.  Since you are looking east into the sun, it is best to come very early in the morning or afternoon. Driving down Mt Pisgah Rd on the east side of the landfill can also be productive as the Black-backed gulls typically occupy the top of the posts visible from this side.

American Woodcock
Marking the end of winter and the beginning of spring is the arrival of American Woodcock. In late February through March and into April, the American Woodcock pass through York County.  They can be found by listening for their ‘peent’ call just before dusk.  After hearing the ‘peent’ call, listen for the whistling wingbeats as they begin their ascent into the air to perform their unusual courtship display and descent to the ground.  Woodcock prefer damp, brushy, woodland areas located next to an open field.  They are not common in York, but are most likely seen in the state gamelands.  In the past, they have been observed displaying at High View Park, SGL 243 and 242, as well as the Indian Rock Dam Gamelands near Woodberry Rd and Indian Rock Dam Road.  They have also been seen in the cabin area at Pinchot Park and at the nearby Warrington Twp Park.

Note:  All pictures in this birding guide are actual pictures of birds taken while they were in York County, PA by David Arrow.